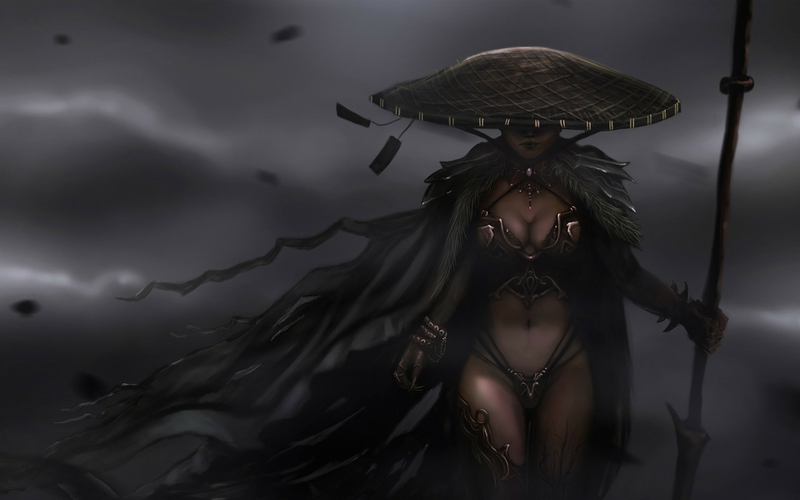 Ko stopped looking around her; the day was as damp as her spirit.

Perhaps the sun would be out another day, but she knew that places by water were often clouded of a morning, depending on the surrounding countryside.

She and Akira walked in silence, their own footsteps soft on the streets.

There had been no one to greet them when they disembarked, no horses for travel, no wagon.

Akira had taken back his robe, but not before asking if she was warm enough.

She said she was.

“Good. I cannot appear before my master unclothed.”

Having seen something of Akira’s power, she was surprised that he used such a word as ‘master’ in such a nonchalant manner, and didn’t want to think about the man who might be stronger.

“You will meet him when he sends for you.”

“When will that be?”

She didn’t feel like playing the slippery eel word games Akira seemed fond of, at least with her.

Perhaps if I were a boy he’d share more freely.

“Gender did not matter, Ko; it was a matter of other things.”

He said it calmly enough, but she knew better than to answer.

“All things, in time,” he reminded her.

Ko looked up at the monastery, on the summit of a medium sized hill, shrouded by yet more fog, with torches burning like captive, dying stars above the crenels.

A bell pealed, signaling their arrival, but Ko saw no watchtower.

“How do they know we’re here?”

Akira smiled down at her, and gave no reply.

I want to stomp on his foot Ko thought, and instantly regretted it, not knowing if he could read her thoughts.

A monk in a dark red robe with gold piping opened the doors, and two more in similar garb stood in the middle of the entrance, bowing from the waist to Akira.

“Welcome home, brother,” the monk on the right said.

“Welcome to our guest,” the monk on the left said.

Akira stopped, and greeted them with a slight bow of his own.

Ko followed his lead, and the monk who greeted her grinned.

“We part here, Ko. Brother Koji will take you to your quarters. I will meet with you again at evening meal.”

Ko felt a shot of anxiety rush through her; she said she didn’t trust what Akira said, but she trusted Akira.

He said no one would harm me, and time would prove it true.

“This way,” said Koji, and Ko followed, feeling the eyes of the other monk and Akira watching her.

Another test. I mustn’t look back or he’ll know I’m afraid.

She quickened her step until she was beside Koji, and felt the weight of their eyes lifted.

Brother Koji had a kindly face, clean shaven and rotund, like his body.

To Ko, he looked like a barrel with legs, and she smiled at the image, but didn’t laugh.

She blushed, as if he’d heard her thought out loud, but the lie came easy enough.

“Yes, Brother Koji. I was just thinking of home.”

His eyes grew soft in sympathy. “I hope you will see it again one day, young miss.”

Ko felt bad about the deception, but what he said actually got to her, and she felt the hot sting of tears pop up.

“It is my only wish,” she said, mourning that her father was a coward, and her mother as shadowy and vaporous as the dark corners she seemed to prefer dwelling in when they were indoors.

“Well, while you are here, I hope you will come to find some pleasantries to keep your days fulfilled until then.

He opened the door for her, and stepped out of the way.

Her room at home had been small and cheaply furnished, but that room was a palace compared to this one.

There was a bed, with a thin blanket, thin mattress and flat pillow, and a nightstand on which sat two pieces of bad pottery that were a pitcher and cup, and a ceramic vase of dubious use tucked into a shadowy corner.

A wooden chair and desk occupied the wall opposite.

“Welcome, young miss,” Koji said. “I will return for you when it is time for the evening meal.”

He bowed, and walked away.

Ko wanted to cry, scream, and faint all at once, but the fight was out of her, and she merely sat on the edge of the bed, her mind numb and her vision blurry, until the events of the day overwhelmed her, and she threw herself onto the mattress, and wished herself dead.

Her eyes only granted part of her wish, and merely closed.

“Hakurou will see you now, Akira,” the monk who greeted him said.

“Now? I thought he would wait until after the evening meal.”

“As did I, since that is what he first ordered, but upon your arrival, he saw no reason to delay.”

They arrived at a set of large, black marble doors with bronze, vertical handles shaped like swords, though the edges were dull to prevent cutting.

Akira opened the door; his master had no need of guards.

He walked in on his master pouring a second cup of something brown and potent, and he turned and smiled, waited for Akira to finish his bow, and offered him the cup.

They drank in silence, though Akira felt the weight of the elder’s power observing his face, as if deciding whether or not he would take the life of a spider that landed on his last piece of bread.

Akira coughed, and waved his hand.

“Ha! You would be sober for vespers, then. That’s good. Ever the faithful monk, you are Akira.

“How fares our young charge?”

“Her father handled things poorly, and she spit in his face as she left him behind. Of course she was scared, and sullen at first, but seemed to resign herself to things soon enough, and peppered me with questions I had to stop. Also, she is quick-witted, and not easily frightened.”

“You did not tell her why she was chosen.”

It wasn’t a question, but Akira answered to assure him.

“Good; leave that to me. Spitting in her father’s face, though, shows rebellion.”

“Rebellion is often the outcome of betrayal, Hakurou. Is that not why we need her?”

Hakurou finished his second drink, poured another, and under his silver white mustache, Akira heard his voice deepen almost to sorrow as he let out a heavy sigh, nodding.