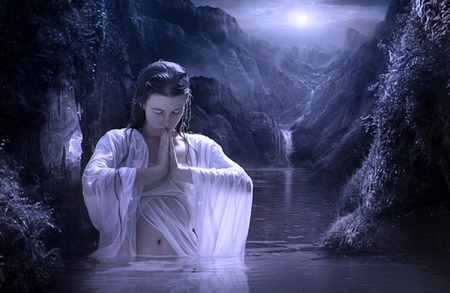 The door opened, and the soft red light of the hearth fire glowed invitingly.

“Come in, Mitre Harkin, before the scent of the Hunters fades, and the animals grow overbold.”

I stepped inside, and the being that greeted me was somewhere between fae and monster.

It was female in form, tall, angular, a smooth, with platinum hair fanning across its shoulders like a silvered cowl, and I took a step back.

“Do I frighten you in my true guise?”

Before I could answer, it began to change: the shape grew more feminine, the flesh took on color, tone and shade, and the silver hair turned the same shade of red as the fire, as did the eyes.

It never turned its gaze from me, and I could feel the magic tingling under my skin.

“Is this more pleasing?”

Not able to trust my voice, I nodded.

“And how did you know my name.”

The Summoner smiled. “A little bird told me.”

She pointed to a cage with an open door, where the pearlescent white bird sat, now more interested in its seeds than in my face.

She led me to a small table with a small lantern, and lit it.

I sat, and she took the seat across from me, and began to change again, into an exact replica of Xantara.

“This is the girl you seek across worlds?”

“Yes.” Questions were burning on my tongue, but time was of the essence, and I had to tell myself that despite my curiosity, I didn’t really want to know.

“Very well.” The Summoner didn’t change back to her true form, and sensed my discomfort.

“If this is who I am summoning, this is how I must remain,” she explained. “There are rules governing these things too, Harkin. We are not allowed to do as we please.”

I cleared my throat. “Good to know.”

She smiled without amusement. “Give me your hands, and call to mind what you know of her.”

I obeyed, and she closed her eyes for a long moment before she spoke again.

“She trusts me; I would not violate it, and she is of another time, and young.”

“You are a man of fortitude, for she is a surpassing beauty.”

She smiled again, with amusement.

“Indulge an old crone, Mitre Harkin; I don’t get many visitors these days.”

I said nothing so that she could get on with it.

Another long moment, then more words.

“The demon gravely frightened you.”

I swallowed, then replied, “Yes.”

“It wants to use you as bait, to kill the Protector.”

I said through gritted teeth: “Yes, that is the message I want to tell her; she is returning tomorrow, and I don’t know what time. I have to warn her.”

Since my ride out of the temple gates, it seems my senses were heightened: colors were more vibrant, the air had scents riding its currents, and it seemed as though I could see distances as if they were near.

The sounds of birdsong were never sweeter, and the tangy musk of the horse I rode was sharp in my nostrils, but not unpleasant.

During the walk through Dark Wood, the night seemed to want to blend me into it, and I wasn’t afraid, even though I was with the Hunters. It might also have been Vilus conveying her own fearlessness through her small hand into me, but that didn’t feel entirely true.

Now, I was aware of a sweet, slightly cherry scent from the hearth, the even breathing of the Summoner, the crackling, hissing dance of the red flames and the small branches, and the redolent scent of patient age and fleeting time laced with pine and spices the Summoner used in her art.

My own breathing evened out, and the rigors of the day seemed to peel themselves from my spirit.

I wasn’t aware that I’d closed my own eyes until she spoke again, in Xantara’s voice.

My eyes opened, and I gasped: the Summoner’s eyes were milky white, with nothing else inside them. A jolt of fear that Xantara was struck blind flitted through my mind.

“I…I got a Summoner to call upon you; something’s happened, and you need to know.”

“I got a visit from a demon; it first sent a messenger, that only manifested part of itself; it snatched away my covers, and then there was laughter, loud and deep, beneath the floor when I set out to warn you.

“They’re going to use me to get you, Xantara. You mustn’t come back today. They’ll strike at you through me.”

“Oh, Mitre! That you’ve used such unwholesome means to warn me…”

The Summoner looked away from me, as if someone else was in the room.

“What? Oh, it’s nothing Antarus, I was just practicing a spell over distance.”

“Oh, I’m sorry Mitre Harkin. I didn’t tell you? I found another Protector!”

She reddened. “Or rather, he found me. He’s one of the male sect who escaped the slaughter of the last war. His name is Antarus; he’s been with me awhile, and,” she reddened again…”we’re betrothed.”

I knew it wasn’t physically possible for my heart to sink, but it felt that way.

I admit that I was careless, that I panicked, and I blurted out the truth as I knew it.

“He’s going to kill you, Xantara.”

“Yes, he’s in league with the demons. You must leave, now.”

“I’ll explain everything. Meet me in the Dark Wood, at the Summoner’s. I’ve friends to guide you.”

“Then trust me now, dear one. Flee for your life.”

The Summoner began to change again, the shoulders broadened, the hair grew light and curly, and the eyes went from white to blue.

“Ah, Mitre Harkin. Foolish of you to speak to her so, when you knew I was here.”

“Antarus! Don’t you dare harm her!”

“Or what, Mitre? You’ll perform a ritual for a god of stone to hit me with a rock?”

“Xantara is ours, and there’s nothing you can do about it. I’ve blocked her senses, so she doesn’t know about our conversation; I’ll even let her come back to you, just to prove that we can take her from you, whenever and…however…we want.”

His tone changed from threatening to casual, as if we were talking over a cup of wine.

“You’ve been a friend to her, Harkin. She blathers on about you all the time, and how wise and kind and good you are, so I pretended to be those things too, and now,” the Summoner’s arm went out in the air, as if around someone’s shoulders,  “she belongs to me”

“Why would you turn against your own kind to aid in the destruction of man?”

“Why do you think, Mitre?” The Summoner’s arm settled back on the table, her hands clenched not quite into fists, but close enough.

“They promised you something. You idiot child, they’ve lied to you. They do nothing but lie; they are incapable of doing anything else!”

“Then you sold your soul for a trifle. If you come for Xantara, I will fight you, Antarus, with everything I know.”

The Summoner sat back, and smiled the way Antarus would; smarmy and cocky, confidence corrupting into arrogance.

The Summoner began to change back to Xantara.

“Mitre Harkin? Are you still there?”

I was sick of heart, and gut, and mind, but I couldn’t let her stay there.
“Yes, Xantara, I’m still here.”

“What was it you wanted to tell me?”

“Nothing, my dear. I’ve taken enough of the Summoner’s time. I’ll see you tomorrow then.”

“I look forward to seeing you again, Mitre Harkin. I enjoy our time together.”

The Summoner smiled as Xantara, and the smile faded as she began to change back into her original form, all milky substance, a spirit coated in liquid flesh.

Her expression, much as it could be, was stern.

“Your fondness for her made you reckless, Mitre.”

“The war will come sooner than later, then.”

“I suppose. What will you do?”

“What I’ve always done in troubled times; rely on the Dark Wood to keep intruders at bay.

“That will be ten gold pieces, please.”

I dug it out, but had to ask. “Why does something like you need gold?”

She took the pieces, and held them in her hands, gazing at them with a small smile on her lipless mouth, then looked up at me with those milky eyes.

Black smoke began to roil in inky tendrils up the chimney.

She inclined her head toward the door.
“Mitre Harkin, I wish you well.”