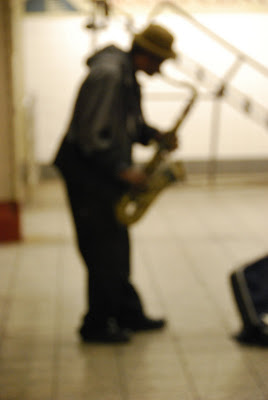 Just to provide some background for this story:  I started out as a guitar player at the age of 11. I had a classical acoustic guitar and I was going to be the next Earl Klugh. Between the ages of 14 -17 I sat in with these old jazz heads in Washington Square Park.

I stayed mostly silent but they let me join them on some of the easier stuff, until one day I heard the words from the de facto leader of the group. “You did a nice job on that.” It was, at the time, like a five-star rave review in the New York Times, but way led on to way, and in time, the group thinned out, and eventually they didn’t come back. And after awhile, as I sat in with new players and did new songs, way continued leading on to way, and I stopped going there as well.

I’ve often thought about those men, old men even then, no doubt passed on by now, and I’ve been thankful they were gracious to a young man with a love for the music who didn’t have the equipment or the know-how to play it, but who took what he had, and eventually heard the words, “You did a nice job on that.”

As jazz continues to hold a precarious place on the American music scene, I wanted to write something to show my appreciation not just to those men I sat in with, but to others like them who keep the flame in the hot tunnels, smoky clubs, concert halls, and  libraries and museums around the country and around the world. Now, without further ado….

The sun was sinking into the river against the city skyline. Leon sat in a patch of it as it came through the window, his shirt and tie barred, like Cyrano’s body, with the shadow of crossbeams that separated the window panes.

The doctor came out, and Leon stood up.
The doctor’s face said everything.
“I’m sorry, Leon. The tests are conclusive. I don’t know what to say that would make it easier.”
“Ain’t nothing left to say.”
“Is there anyone you’d like us to contact?”
“Got someone, but I’ll take care of it.”
“All right then. And Leon…” The doctor offered his hand.
Leon took the doctor’s hand in both of his.
“You done what you could, doc. thank you.”

******************
He walked out into the evening, the street alive with people and lights, cars and movement, the last of the sun ray’s deepening the shadows to a dusky blue.
The subway rumbled beneath him, and he headed toward the nearest station, then stopped.
Be underground soon enough. No need to rush.

He chuckled at his own weak joke, and took the long walk home.

“Everything you need to know is in that old cookie tin you gave me for Christmas all that time ago. Everything’s in there, along with a note for my last wishes. I got some time yet, but I don’t, so you don’t have to come tomorrow, but don’t come too late. I don’t want to go in no potter’s field, though He’ll find me if I do.
“Just try not to let it happen, that’s all.”

*********************
His battered saxophone case was under the rickety bed, with the tarnished, well worn saxophone inside. He pulled it out, and sat on the edge of the bed, and looked at it, going back in his mind to the smoky nights, spent playing til the sun came up, so dapper he glittered in the spotlight, and later the feel of a full, warm woman on his lap, in his arms, in his bed, til time passed and the people moved on, and the clubs closed, and his career stalled, and stopped where it had started, and never moved again.

********************
Bars replaced clubs, drink replaced music, and even the most stubborn woman he’d ever met who tried to stay with him no matter what, threw in the towel before her own youth was wasted with a man who couldn’t move on, whose identity was too closely tied to what he did, and not who he was.

********************
Back into the evening streets, his case bumping along his spindly left leg, his suit fitting badly, but clean, and his face washed, he paid his fare, went down to the subway platform, but he didn’t open his case for change this time.

She was leaving it up to him what to play, and he knew so many songs, but as he looked back into her eyes, and saw her smile at him, the song came like a lightning strike.
He played her something. And something else, and something else, til the band caught the pattern and the gist as they caught them staring, and they smiled and shook their heads, and simply followed.
“Leon at it again,” said the piano man. “On three, fellas…”
Three months later, they all came to the wedding.

*************************
Leon played the set through, but it was melancholy with a twist of bitter, haunting and bluesy and sad, with a splash of hope, and a sprinkle of joy.
A young cop began to walk toward him, but something made him stop, and he paused for a moment to listen, and a crowd began to gather. This was not the average subway joe who practiced for coins. Those who knew music knew this was the real thing, and those who didn’t felt it.

“All the Things You Are” echoed throughout the station and into the tunnels, a plaintive, restive, devotion leaking out with the realization of how utterly unattainable all of her had been, in the end.

The song ended, and the crowd clapped loudly until the rumbling train drowned it out, and they turned away to get on with their lives.
The cop came up to him.
“I know you. I know that song. My father had one of your records, and he played it all the time.”
“Did he, now?” said Leon, wiping the mouthpiece. He grinned, turned to look at the cop, a twinkle in his eye. “Only one?”
“No sir,” the cop laughed, “he had others, but that’s the one he played the most.”
“Played,” Leon said. “Is your father still alive?”
“No sir, he passed away five years ago.”
Leon straightened, gave the cop full attention.
“I’m sorry, young man.”
The cop said nothing for a moment, then “It was an honor to hear you play live, sir. I only wish my dad would’ve been here.”
“My pleasure,” Leon began to walk away.
And then he turned to the cop, and seemed to think a moment, and walked back, and held out his saxophone case.
“What are you doing?”
“I’m giving this to you.”
“Why? I can’t take it. Don’t you need it?”

Leon sighed. “No, I don’t. See, I’m about to meet your daddy, and we’re gonna be talking jazz for a long, long time.”
It took a moment, and then the cop’s eyes widened.
“Won’t be long now. Left everything else to my daughter, but she ain’t gonna want this old battered up horn. Won’t mean nothing to her except her daddy wasn’t home a lot, and she won’t even think to sell it, and probably just throw it away.”
The cop looked downcast.
“You gonna take this?”
“I can’t, sir.”
Leon leaned in, like he was telling a secret. “Tell you what, turn it in to lost property, then file a claim for it on my daughter’s behalf, and take it later.”
“Mr. Leon, are you sure?” The cop took the case like a sacred offering.
Leon straightened again. “I am. It’s the least I can do for a young man who grew up with my music, and who saw my last concert.”
The cop seemed to flinch.
“I…I’m sorry, sir. I truly am.”
Leon put his hand out, and the cop took it, and Leon put his other hand over it.
“It’s all right, son, you done what you could. Thank you.”