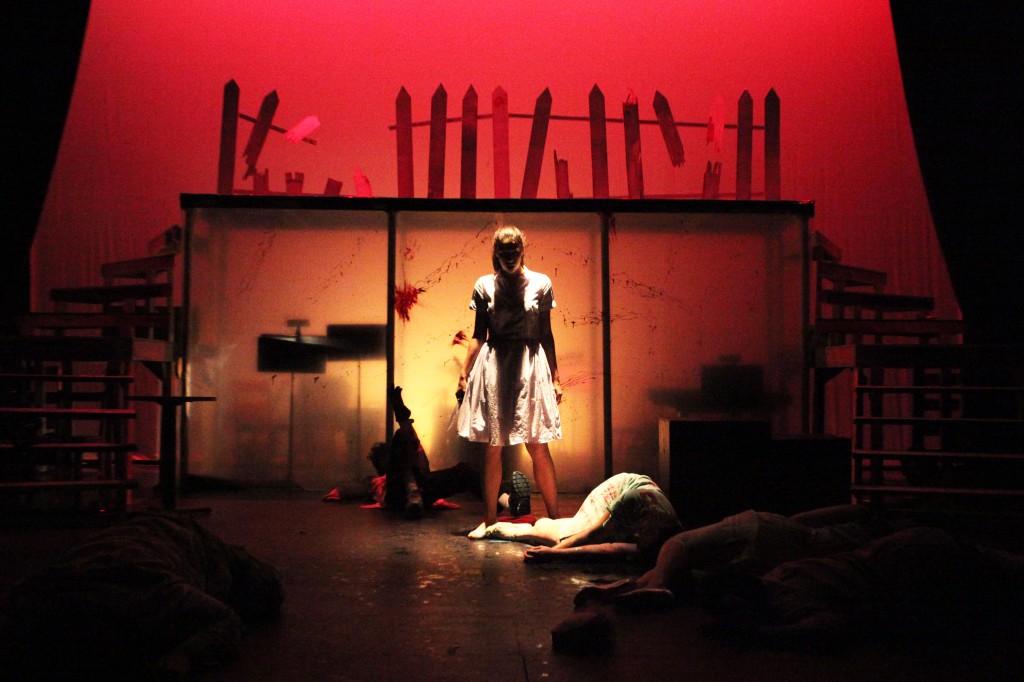 The audience grew silent as the houselights finally dimmed.

The darkness settled over them like a worn, well-loved cape across the shoulders, providing an intimacy and warmth in the small theater.

A single spotlight, silver white, hit the center of the stage, and in the middle of it stood a man with a knife protruding from his throat.

Rivulets of blood widened and thinned in time with his heartbeat, and his head was down, his black hair hanging limp and greasy in front of his face.

He looked up, and his eyes were gone, the crimson ruin of his sockets turned toward the audience in all their grisly glory.

Some screamed, some turned away, some fainted, but none left.

The actor shambled toward the front of the stage, and those in front shrank back from his grim visage as he seemed to look at them one by one, and smiled affably, for all that his lips were swollen and his teeth were gone.

“I can hear your heartbeats, feel the heat of your blood rushing to your faces; the tang of your sweat is in the air like bitter brine, mixed with perfume that smells like sweet tea.

“You, dear audience, are a study in contrasts. You fear me, but don’t run, because you’ve paid to see me here.

“Here I am. Are you pleased? Do you have your money’s worth?”

He waited, and some began to sob as they rose to leave.

“So soon? You’re being rude. You haven’t met my wife yet. Honey?”

A woman emerged from the opposite side of the stage, her torso split, organs shining wet and red in the spotlight, her head at an odd angle, with a short piece of rope still wrapped in a thick coil around her neck.

“What crime did I commit,” she said, “that they treated me so?”

She went and stood beside the man, and they held hands.

She kept her free hand around her body to hold her organs in, and blood cascaded over her arm as her knee buckled, but the man held her firm.

“Can anyone help us?” she said.

The people in the back began to scream, and cries of “Let us out!” reverberated through the theater.

“They’re rude, honey. They want to go. Can you hear them?”

“I can hear them. Shall we release them?”

“I think we should.”

No one was left in a seat as the audience scrambled, screaming and crying, for the door.

“You haven’t finished watching the play; there are more of us,” the eyeless man said.

From the balconies and exit lobbies, other actors and actresses in dead makeup shambled toward the captive audience.

As they fled to the exits, they found the doors locked, and the cast, about one hundred in all, shuffling toward them, hands outstretched to tear, fanged maws opened wide as they salivated over their crumbling chins.

The man and woman called from the stage as the dead cast members began to tear the people to bloody strips.

“Thank you for coming,” the eyeless man said.

“We hope you’ve enjoyed our play,” the disemboweled woman said.

They took a slight bow, and came down the stairs to take part in the killing, the white spotlight following them as far as it could, before it went dark.

I had a theater teacher in college who was a playwright . We did his plays with him, and I thought they were okay, but only okay.

I remember that he hated Neil Simon with a passion, and thought he was a hack, even though Neil Simon had his finger on the pulse of the American theater-going public for a while, (longer than my teacher did, but that’s another post).

We were having a class discussion about doing ethnic plays without the original ethnic group. He began a discussion on how the craze at the time was doing plays with multi-cultural casts that were not from the playwright’s country.
He gave the example of an all-black cast production of Chekhov’s “The Cherry Orchard,” with Phylicia Rashad and some other well-known black actors / actresses, and said that doing it with an all-black cast just for the sake of doing it wasn’t theatrically valid, because they couldn’t bring to it what Russian actors could, who understood the subtlety of meaning and history behind the play that black actors could only emulate to some degree, but never really understand.

Being black myself, I figured he was probably right about that, though of course, some of my classmates (not just the black ones) bristled at the thought.
I personally thought it was a valid argument: it would be like Russians doing the play Fences, by August Wilson, or a Chinese cast doing Raisin in the Sun.
“It’s not their idiom,” he said. He was right.

I’ve seen writers attempt black dialogue, but it mostly misses the mark. That’s not to say it’s bad, it’s just off.
One of my favorite mystery writers, Robert B. Parker, of Spenser fame, failed at it over and over again with his character Hawk, and a lot of the black characters he wrote. To me, he never captured the nuances. I overlooked it, though I shook my head at some of his attempts, because I liked his stories. Ed McBain (Evan Hunter), the author of the 87th Precinct series, on the other hand, was fantastic at it, if a little repetitive.

And, truth be told, not every black character written is required to speak that way. It doesn’t make it any less ‘authentic’ to have a black character speak without being ‘urban’ (whatever that means).

Does that mean an author who isn’t black can’t write black characters? ‘Course not. Write whatever ethnicity / race / dialogue you can. Write all of it. But here is where the writer’s ear plays an important role; I’ve seen white comedians do dead-on impressions of black speech patterns, not just ‘ebonics’, but the inflections and rhythms as well.

There’s a music in it, a poetic flow that rises and falls, a pulse that’s hard to feel if you didn’t grow up listening to it. There are actually regional differences too, between northern and southern.

Capturing it successfully was primarily the reason for Eminem’s success in the predominantly black rap industry, because he’d steeped himself in the culture, and came away with it. It’s why (ahem) Vanilla Ice….melted away.
The comic from Africa, Trevor Noah, is a master at it, because it’s not even an idiom spoken by Africans. (Check out Trevor Noah: African American on Netflix to see what I mean.) Bill Burr and Anjelah Johnson are two others who do it well. Anjelah Johnson has a great ear for the voices that inform her comedy.

As for me, I was fortunate enough to read a wide variety of poetry and literature from around the world, from Dickens to Dosteovsky to Dumas, and see a lot of foreign movies, and watch a lot of medieval stuff, and see productions of the Elephant Man as well as Paul Robeson, both excellent, minimalist plays; the first with Bruce Davison, who wore no makeup and still managed to convey the pain of deformity, and James Earl Jones as Paul Robeson, who may be a reincarnation.

My dad was into Shakespeare, and opera, and James Baldwin, and Maya Angelou, and Khalil Gibran, among others; his library shelf provided my summer reading for a long time.
And my mom spoke French, because she wanted to go to Paris one day, but cancer didn’t let her.

And while I try not to consciously write to any specific ethnic / racial audience, because I want you to imagine as much as possible without my guidance, it’s because of that I can write Of War and Breakfast and Bring Me No Flowers, and be the same guy.

But even though I can understand both stories, the history of what had a bearing on the events that shaped me lies with only one of them, and when I write that story, it speaks to me a lot differently.

And that’s fine, because while one may be ‘my’ idiom, and the other one isn’t, all of it can be learned, and mastered, and conveyed, if you take the time to really hear it.