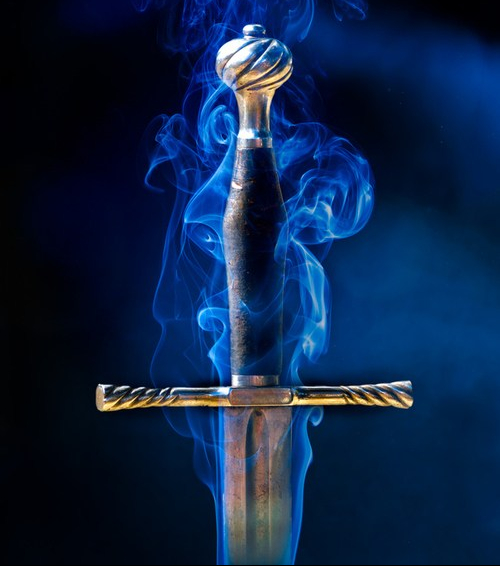 Carabelle watched closely, her big brown eyes catching the amber highlights of the hearth fire, as her father put the sword he finished yesterday over yet another flame, an eldritch flame of a magic that could turn out to be good or evil. But where the hearth fire danced with fiery scarves the shades of autumn leaves, this Lorefire, circled in stone, had the shades of a deep winter night when the full moon turned a snowy forest to hues of silvery blue.

She was conflicted. Mother had made him promise never to share the ritual of Lore-binding with her.

“Too much could go wrong. They’ll turn her. They’ll take her, and she won’t be able to stop them. Then what would you do?

He opened his mouth, but hesitated, tried again as she clutched his sleeve, her nails scoring his skin as her body arched slightly. She gasped twice, looking, her eyes hopeful, then widened in panic as she saw that he wouldn’t. She tried to hold on for one more breath but couldn’t. The promise remained unspoken, but Carabelle, standing just outside the door, heard her mother’s plea.

Pim, after a moment or two passed, suddenly turned into a blubbering heap; all Carabelle could do was go inside the cold room, hold him in her small arms, and cry with him.

When she finally looked up, her mother’s eyes were still open, still staring, still waiting…

“The secret to Lore-binding, Carabelle, is a strong funnel. The spirits are contained behind all sorts of things that separate our worlds, and a Binder needs to be careful. They crave to interact with humans, reclaim that which they left behind.

“In the space between realms, if they escape the funnel there’s no telling what they’ll do.

“Some even dream of conquest.”

“Mom told you to promise never to show me this.”

“I know, and I wanted to, but I couldn’t because the times are too perilous. But you’re of an age now, and we had no son that I could pass this down to as a legacy.” He stopped for a second, the sword balanced across his hands, his eyes locked onto hers.

“Carabelle, are you afraid? If so, leave now, and we’ll never attempt it again. I’ll never speak of it again with you, and I’ll find an apprentice.”

Carabelle was tempted, every cautionary instinct shouting, but she finally shook her head. “I’m not afraid, Father.”

It took both hands, slow steps, and great caution, but Carabelle guided the funnel safely into position, encircling the fire, snug against the perimeter stones. Pim nodded approvingly, and she felt a warm glow of satisfaction, tinged with guilt as it was.

“Now turn the hourglass. I have to close my eyes, sweetheart. Keep watch, and call me out of the trance immediately if something goes wrong. Don’t be afraid to wake me. Do you understand?”

Carabelle swallowed as she turned the hourglass, then looked at her father and nodded. “I understand.”

He sat on the floor, cross legged, and she did likewise next to him, watching in total fascination and not a little dread.

The blue flame popped and sizzled against the funnel glass, and he took a handful of it and encased the hourglass in it so it shared the boundaries, so it couldn’t be knocked over or broken by a sprite.

The flame around the hourglass intensified, grew brighter as if someone was lighting a blue-flamed torch from the inside.

Pim barely registered Carabelle drawing close to his side in fascinated fear, trembling, but she dared not look away.

The first of the spirits came through, blurred and amorphous. It was the color of old parchment, its misty hands casting about like a blind man lost in a strange place. Hovering between the funnel and blade, its empty eye sockets found her, and it smiled, but not in a pleasant way. Finally, it moved into the blade and was lost to sight.

Other spirits followed, their fogged features better defined though they all had no flesh.

There was a disturbance, somewhere out of sight; the blue light in the hourglass flared, and a rush of spirits followed, feeding themselves to the flame to avoid what was coming.

Pim opened his eyes, saw the flame around the hourglass pulsing, and grew alarmed. “That’s not supposed to happen.”

Inside the funnel, the spirits were gone.

The face of Carabelle’s mother was floating inside now, spectral and fierce, and all the more terrible for the silent recrimination in her eyes.

Pim scrambled back as the glass began to crack.

The lives that will be forfeit now, husband, are on your head. Their blood is on your hands, charged to your immortal soul.

Carabelle screamed, drew herself up into a fetal position on the floor, and covered her face with her arms. She felt shards like pins in her sides and on her legs, and a couple of pieces into her bare forearms; there’d be cuts, but nothing life threatening.

A larger piece of the coated glass jetted across the floor and caught Pim in the throat, and his mouth worked fishlike as he tried to draw breath, his neck bathed in a red cascade of blood. Panicked, he only sliced his hands in a pointless attempt to remove it.

Incredulous at the suddenness of the mishap, kneeling as he weakened, he looked at the blue flame. His wife’s face dissolved, and roiling cloud of blue-white spirits poured themselves into the blade which was now turning blue, the runes appearing, but not the ones the Wizard Larin commissioned.

That’s not supposed to happen…

His eyes searched for his daughter, and the sight left to him froze him with dread and profound regret at not speaking the promise.

A single blood red spirit with a jet aura glided over to Carabelle, still cowering and shivering on the ground; it turned and gave a feral smile to Pim as he died, and the last thing he saw was the spirit descending into her.