Indrissa hated the market, until he made her see it through new eyes. 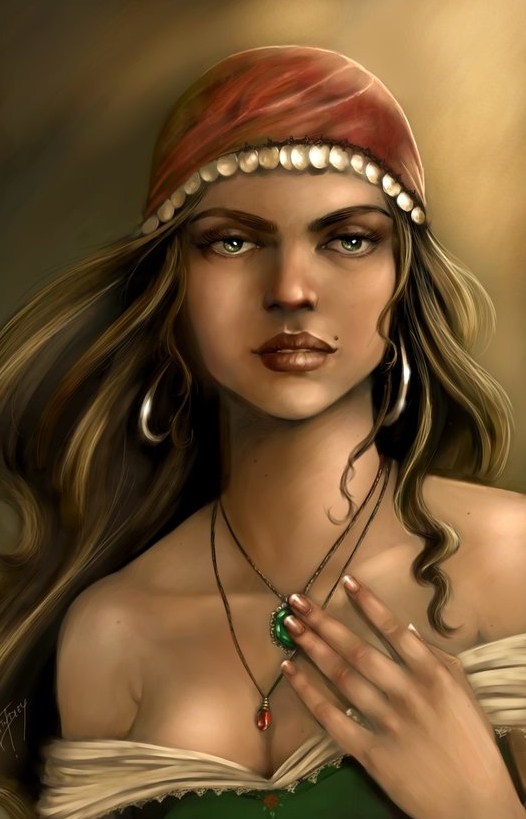 Indrissa hated everything about the market: the noise, the smell of animals, the smell of people, the squalling of reckless running children that always resulted in something breaking, fighting off the feral animals that roamed and the endless vermin that stayed, the constant haggling, the heat of the sun, and the leering of men.

Resigned, she lamented her lot, until the day he came.

He bought a small, cheap necklace from her with a fake green gem and asked her to try it on so he could see how it looked. “I’m buying it for a special lady.”

Humoring him as well as herself, she put it on. “I’m sure she’ll be happy with it,” she fastened the clasp and looked up at him with a fake smile, “and pleased with you.”

He smiled back. “And are you?”

She tilted her head and looked at him, questioning his meaning. “What?”

“Are you happy with it, and pleased with me?”

She began to unfasten it and hand it back to him. “I don’t understand…”

He held up his hand to stop her. “I bought it for you, Indrissa.”

“I’ve watched you for a long time. You always look distant and unhappy; you don’t like the market, do you?”

She felt her face heat, realized her hands were still poised to take the necklace off, but she didn’t.

“No, I don’t. I inherited this business from my parents so I wouldn’t fall prey to the scavengers here.”

Not far away was a stage with half naked men and women, and the grim, silent men below them who’d as soon cut a throat as shake a hand. Gold and silver coins flashed through fingers faster than the eye could follow, and the stage began to gradually empty.

She assessed him, trying to place him, but couldn’t; he said he’d been watching her.

Either it had been in plain sight, or he was stalking her.

Still, he’d bought her a gift, albeit from her own stall, and made himself known; if he’d wanted her dead, or harmed, he had more than his share of opportunities.

“So what are you going to do?” she asked, surprised to find herself a bit shy, “Take me away from all this?”

He shuffled a bit, now nervous himself. “Not right away. I could make coming here better for you, though.”

“It’s what you’re selling. No one wants that. It’s for children…”

He stayed at the booth, talking business in between flirting.
He bought lunch for two, and sat beside her as they ate.

She could see some of the other merchants begin to cast furtive glances in their direction.

If he noticed, he didn’t seem to care; he was all business, offering to increase the value of her wares, and if she wanted, she could take him on as a partner. They’d do well together, and ….

The hours went quickly, and he helped her pack and walked her to the gate.

“Will I see you tomorrow?” she asked.

She actually giggled, and nodded. “Yes, I would.”

“Then I will be here.” He stuck out his hand for her to shake, and she did.

At home that night, bathed and pleasantly exhausted, she had a sip of something strong, and stared out the window at the rising moon.

She thought of him, and her hand went to her throat. With a small smile, she felt the gem and chain beneath her fingertips.

She’d forgotten to take it off, and now she didn’t want to.