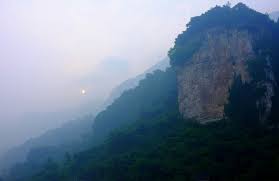 When he arrived after many days, he was hungry, thirsty, and exhausted.

It was still some distance away, but at least within view, and he spoonfed his heart what little hope he was able to convey, since it lifted his spirit to at least be able to see it.

He began thinking about walking the pleasant paths, carefully picking those he wanted; it wouldn’t be that the others were not good, but he would not need them. He lit the fire of his imagination, poured some warm wine into his mouth, found some shade, and took a long, much needed, and peaceful rest, drifting off as the stars peeked at him and the moon rose to put bathe him in its soft, pale lemon light.

In the pleasant cool breeze of the coming morning, amid a raucous chorus of birdsong, he set off for the final leg of his journey.

He would climb to the summit, and from there, be able to pick and choose his next path.

At mid morning, he stopped, not quite believing he’d made it: the mountain was in front of him.

He could see it, feel the wind that emanated from it, see the shadows cast by the rising sun, and his heart swelled within him.

It was nothing short of glorious!

Wanting to gather strength, he ate a light meal, checked the large empty spaces of his bag, and approached the base of the mountain with an almost holy reverence, even as his vision scanned about for the first word.

He saw it, and his heart thrilled. Kneeling to pluck it from the clutches of the tangle surrounding it, he held it up, examined it, and satisfied that it would do, he placed it in his sack.

The next word, being somewhat unusual, took him longer to find, and it was almost noon before he finally saw it. He repeated the morning ritual, and again, the word went into his bag.

By the time gathered the other two, ‘a’ and ‘time,’, the sun was going down, and he began to realize

This is not going to be as easy as I first thought.

But he had his opening line….