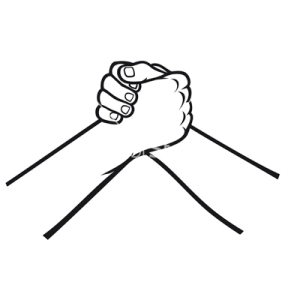 My son has Asperger’s, but we pushed him to do as much as he could within the confines of his limitations, meaning, we didn’t restrict him from doing anything he wanted to try.

He rollerbladed, he rode bikes, he flew kites, he fished, he played baseball and football, but he chose basketball, and he would go to the court where they would let him play; I wanted to stay and watch, but I knew if they bullied him in any way, I’d be over there to ‘do something about it,’ and they were kids.

He asked me not to hang around, because he knew it too, so for both our sakes, I respected his wishes, but then one day it happened.
A ‘friend’ had shoved him, knocked the ball out of his hands, pushed him down, took his sneaker off and threw it out of the park.

I got on my horse, Righteous Indignation, and rode forthwith to the evildoer’ s parents’ house to ‘straighten things out’ which was a euphemism for ‘get even with this kid.’

His mother opened the door, and I read the scroll of charges. She said that she would ‘talk to him.’ I controlled my anger (somehow), and decided to file a police report (remember, I controlled my anger…) I go with my son to the police station, and the officer who hears my tale of woe says he knows the kid, the mom’s recently divorced, and they’re having a rough go of it; he doesn’t want to write a report. He will if I insist, but how about he brings the kid over to talk about things.

“Fine,” I say, rehearsing my speech full of reprimand, reproach, and recrimination.

A half hour later, my son is upstairs when the doorbell rings. I answer it, and the cop is there, his arm around the kid’s shoulders. ‘Like he’s the one that needs protection here’ I think (not bringing to mind that the cop told me, a half hour ago, that his father was not around to deal with me; wait, it gets better…) The kid looks chagrined, but I don’t buy it.

I invite them in, and call my son, who coming down the stairs, sticks out his right hand and says, “I forgive you.” Just like that. No preamble, no pointing finger, no yelling, no nothing. It’s real and pure and from the heart.

The cop smiles, and I shrink down to an inch like Fred Flintstone when Wilma lit into him good (carbon dating myself, but there it is). I’m standing there with my mouth open like a stranded fish. My horse, Righteous Indignation, looks at me sideways with, well…righteous indignation. We were riding all around the neighborhood to get justice, and this is what my son does?

“We’re good here?” the cop asks.
“Yeah,” my son says.
“Yeah,” I say, because I’m still asking, ‘what just happened?’, and because there’s nothing left to say.
“See you tomorrow?” my son asks.
“Yeah, see ya.”
And they stayed friends.

If it’s possible to have soaring pride in a person who’s just deeply humbled you into silence, I did in that moment.

And I still do.