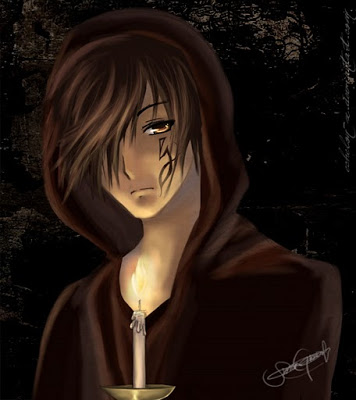 A gibbous moon pressed down on the sky like the thumb pad of a jaundiced god. A ragtag band of villagers chased a boy into a forest clearing, surrounding him, but not rushing to seize him.

He felt every inch the trapped animal, save he had no claws or teeth. There was only a single knife which he clutched more as a talisman than a weapon. Crackling torches forced him to put up a hand to block the glare, and the mark on his cheek became visible again.

Murmurs of curses, prayers, and amazement buzzed and hummed in his ears. The light in the mark was fading but he could still feel its heat.

An elder couple stepped forward as a walking keg of a man thrust his torch closer to the boy’s face, making him drop the knife as he stepped back and put up his other hand. From what he briefly saw of them, the woman seemed to hold some concern for him, lightly pressing her husband’s wrist down to lower the torch; she wouldn’t stop him from doing much else, but for that at least, the boy was grateful.

Walking Keg had bristly brown and gray whiskers, the moonlight a nimbus in them as he leaned forward and glowered, his free hand poised in the air, uncertain of its purpose. He seemed to want to touch the mark, but didn’t.

The fear in his eyes belied the gruffness in his voice. “How came you by this mark, boy?” The uncertain hand now pointed a meaty finger at the mark.

The boy swallowed, and when he spoke his voice was small in his own ears. “I killed my little sister.”

Thunder had ever frightened him, and this storm had proven no different. In the small cottage at the top of the hill, where he lived with his parents and younger sister, they were more vulnerable than most to lightning strikes.

Seeking his parents for comfort as he always did, the tableau he walked in on shook him to his core with horror.

His little sister was out in the rain, naked, arms outstretched to the sky, eyes closed and a beatific smile on her face. She seemed to be speaking, or praying; he wasn’t sure, but she had a knife in her hand with blood and rainwater dripping from it, washing the blade clean.       Stomach lurching, heart pounding, he ran toward his parents’ bedroom but stopped when he saw the small, bloody footprints that lead from the open door.

“Nylii, what have you done?” He ran from the house toward his sister, and when he came to she was dead beneath him, his hands on her throat, his cheek sliced open from the knife, and the clouds clearing to reveal the dim light of a sickle moon. Her eyes were open, and save for the fact she wasn’t breathing, she looked like she was about to tell him a secret.

Revulsion and horror made him scramble up and make it to the edge of the wet, dank woods as he heaved up the contents of their last dinner. Gasping for air, burning with thirst and wanting to scream, he wiped the stringy, rank spit away with a handful of leaves. His cheek was on fire, and there was blood on his chest and shoulder. He touched the wound to see how bad it was, and it flared, searing under his touch.

He opened his mouth, but the ensuing pain had him back on the ground unable to scream. He felt something go wrong with his blood.

She’d cursed him, marked him. For what, the gods only knew.

More murmurs, louder this time as what he said was conveyed to those who couldn’t hear. He’d played whisper-down- the-line with his friends; he’d be a legend or a monster by the time it got to them.

The couple stepped back.

“She was afflicted?” the woman asked.

He wasn’t sure what ‘afflicted’ meant, but he nodded: “She killed our parents at Reaving Moon. A blood sacrifice.”

Cries and gestures against evil rippled outward through the mob.

“What should we do?” the woman asked her husband.

The boy was tired, thirsty, hungry, and his adrenaline from running had spiked and dipped several times. Now he was just scared and angry.

The husband glared and stepped closer. “Yer damn scar was shinin’! We din’t know what the hell ye were!”

The boy fell to his knees. “I beg you, for one night, let me sleep. I’ll sleep here, outside of your town, and I won’t come in. I promise. Please just go. I’ll be gone in the morning.”

After some hesitation, the wife took the husband aside, away from him and the crowd. He stayed on his knees; the weight of the rabble’s stare was almost palpable as they openly regarded him with an unhealthy mix of fear and fascination. The couple’s conversation, judging from gestures and faces, was brief but heated.

Read more at the link below on Niume.