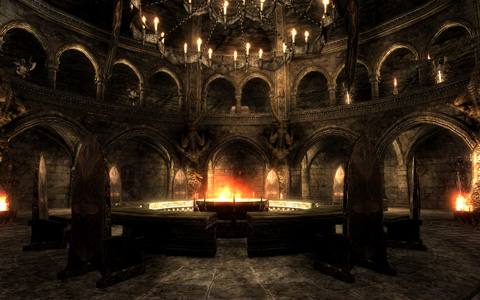 Lydia managed to secure Trace a room in the castle after all, but in the servants’ quarters, where no one would bother him.

In fact, she’d given him Walcroft’s room; the man was long gone, and would not be back.

No one would look for him, but Trace kept him in the back of his mind. Given what he’d said about magic, and him being a member of the court, even though a minor one, he might start trouble for Trace with those who’d want to curry favor with the new ruler, whoever that was.

Walcroft’s room was befitting his station; comfortable, but not opulent.

Used to sleeping in strange places on strange beds, he anticipated no problem falling asleep.

Trace had already incanted to make sure nothing was already inside it that would harm him, then did another incant to seal the room so that nothing could get in.

Trace sat on the edge of the bed, bounced the mattress a few times.

It would do for the night.

He rubbed at his temples, took a deep breath, and poured some water from the pitcher on the nightstand.

His hands shook slightly; it wasn’t the first time it happened, but he felt a fresh stab of alarm every time it did, and it was beginning to happen more often.

He had the night servants draw a bath for him, and he sank deep, letting the steam take him away for a time, letting it take away Lydia’s lingering scent from his body.

He smiled at the memory of her boldness, was caught off-guard by the ferocity of his pent-up need; he had not been gentle, and she, taking his cue, had responded in kind.

Their release on and into each other was so strong it was almost painful.

Where her fingers scratched, his bruised; she took the pain like a warrior, and their mouths and tongues locked in a heated side battle for long moments after.

When she finally broke away and opened those large blue eyes, they were glistening, and her smile was one of affectionate triumph.

Trace, it’s all over you. You need someone.

He got out of the tub, dried himself, unpacked and donned his nightclothes, and tried unsuccessfully to remember the last time he’d had a woman before tonight , much less with the intensity he’d taken Lydia.

He felt a twinge of receding sorcery; the pain in his hands from casting remained long after the scars receded.

Summoning, conjuring, incanting, all of it combined was beginning to take its toll on him physically.

The danger he was constantly in, the near misses of sharpened weaponry, of hot and cold bolts of magic, the narrow escapes, the beatings, both given and received, had their own psychic costs.

Constantly staying cool-headed when he wanted to scream and let the fear overtake him instead of pushing it aside, having to stand and face horrors tangible and otherwise, to resist the powers of demonic hypnotism and temptation, the seductive whispers for him to give up, give in, surrender and die in unparalleled bliss, or unparalleled pain, while others fled and took cover, abandoning him to his fate, was wearing him down.

Training with weapons, training with magic, the long hours spent in the dark before sunrise and after sunset, the reading, the studying, the conversations with things long departed that sought to teach, use, control or just take him, led him to begin thinking about the day he would no longer be able to continue doing this.

He’d already done it far longer than he wanted to.

Far longer than he should’ve.

He had more money than he’d ever need; royalty paid generously to bury their indiscretions.

Peasantry had offered him children, daughters, wives, livestock, a percentage of their harvests.

His sea travels had netted him casks of rare wines, well-aged whiskeys, flowered and fruited brandies and potent rum.

His coffers and larders were full, and would remain so for the rest of his life.

And he had no one to inherit any of it.

His brain, in spite of his best efforts, began racing with thoughts.

He reviewed what he’d seen of Lydia just this night: she was practical, tough, resourceful, sarcastic, which spoke to an intelligence uncommon in a serving girl.

Most of them just went with the flow, hoping that one day the hands that pushed them down onto their backs, onto mattresses, onto haystacks, into mud, the hands that shoved them up against walls of damp, cold stone and  splintery wooden planks, would one day lift them to their feet and restore their dignity.

Bedraggled, beleaguered princesses-in-waiting, the lot of them.

No, Lydia was not among those at all.

In truth, he was flattered that she wanted to share his life, but he felt it was for the wrong reasons, although wanting to escape a life of harlotry was a legitimate enough excuse.

But he was a mage who walked in dark places; more often than not, blood was spilled, and sometimes it was his.

He heard the words reverberate in his mind as he drifted off to sleep, wanting to conjure a vision of their potential future together, but he was simply too tired to do anymore.

The darkness took him under, into a rare and dreamless peace.