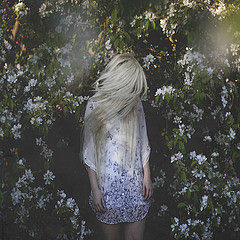 It was after midnight, after the hunters have fed, and the young are asleep, and the night creatures keep watch over them until the break of dawn, when Alis got dressed, found her scarf, took her mother’s apron, and slipped out through the kitchen door.
She loved to explore the woods at night, and she took the apron because sometimes she would gather the herbs her mother would need for the healings scheduled that day. Her mother suspected, scolded her even, on the dangers of being in the woods so late, and Alis tried to listen, but the call of the forest was irresistible to her.
Young as springtime, older than forever, it pulled on her heart until she answered.
When a small light flickered in the tall grass, Alis went to investigate. At first she thought it was a firefly, and went to capture it, but only to hold it; she never captured them.
It pulsed again, way too bright for a firefly; something bigger then, but not large…?
Walking into the high grass, taller than she was, she felt the tendrils brush against her bare arms, and giggled. It was as if someone was painting her into existence, and tickling her at the same time.
The light pulsed, but it was growing weaker the closer she came.
When she stopped walking, the pulse grew stronger.

This was a dilemma; she didn’t know if what she approached was living or not, but she knew she wouldn’t leave until she figured out what the light was doing there.
“I’m sorry, little one,” she said, and walked determined toward her target.
The light seemed to go out, but when she got close enough to see, it still pulsed, barely shining, but it was still there.
It pulsed with the light of a small flame through its red garnet scales: a baby dragon.
Alis gasped in wonder, hurriedly looked about for signs of the mother; surely she would not leave her child here, in mortal danger from predators.
The little thing was on its side, little ribcage huffing out and in, and Alis realized it was dying.
“I’ll take you home.You’ll be safe there,” she said. “If your mother looks for you, she’ll find you safe and warm, and she’ll be grateful to me, and give me a ride, and let me come see you whenever I wish.”
The little dragon pulsed in response as Alis wrapped it tenderly in her scarf, and placed it in an apron pocket.
And there was another glimmer in the moonlight, something that made her look again. On the ground, where the dragon had been, was a small book, bound in black, its cover etched with gold, grand, ornate letters with serifs and flourishes, almost unreadable, but she managed to make it out.

The Book of Spells

The little dragon had been lying on top of the book.
How did she miss that?
Slowly, she looked around, knowing it was ridiculous; who would be watching a lone child in the woods at night?
She picked the book up, dusted it off, and put it in her other apron pocket.
She didn’t really know if she would make it home in time, but she was going to try.

****************
Safely back in her room, she lit some candles, and put the dragon, still swaddled, in an open drawer, and peeled back the folded scarf.
The light was still pulsing, but had definitely dimmed.

Aros, her cat, a black and slender rogue, leaped on the dresser to see what his mistress brought, and licked his lips, looking down at the little red, warm morsel before him.
Alis stared at him, and he gave her an innocent look, as if food was the furthest thing from his mind.
She gave him a smile of quiet menace.
“If you eat him, Aros, I will eat you.”
Aros huffed through his nose, jumped down from the dresser, and curled up in his bed.
Satisfied, Alis went to see what she could find to help her patient.
Puttering around the shelves, she tried to keep the glass bottles from clinking, so her mother wouldn’t wake. In awhile, she managed some combination of herbs she thought would do the trick, crushed them with a pestle, blended them with some fresh water, found a dropper, and went back to her room, hoping against hope the creature wasn’t dead.

becoming adept.
By the time she reached the end of the dropper, the dragon was able to lift its head.
While the candles burned, she leafed through the Book of Spells, and wondered how it was a small, abandoned baby dragon had come to be in the forest, perishing on top of a book of magic.

The spells themselves were magical; when she first opened the book, they were in another language she didn’t know, but as she looked at the letters, they began to writhe and turn and twist, rearranging themselves into her language.
She dropped the book in fright at first, not understanding, but curiosity got the better of her, and she picked it up again, surprised at the power contained in its pages, that it would know how to do such a thing.
Alis smiled, remembering her old beloved science teacher, who muttered

to himself as he went about the class, a ring of white hair around his bald scalp, like a laurel wreath covered in snow, speaking of Great Discoveries.
The way he said it, Alis always thought of the words starting with capital letters: A Great Discovery.
She wondered what he would think of the Book of Spells.
What you have made here, Alis, is a Great Discovery…
Or would he be afraid? Was magic just a different sort of science, or something more?

********************
She remembered the marching out of the warlocks and witches to burn in the surrounding lands outside, most of them beaten bloody, some stripped, some whipped, some weeping, and some defiant to the last, but all of them afraid and unwilling to die…
The sound of fires, of screams, of cheers, of screams fading to silence, of leaving feet, and Alis staring, a small child, easily unnoticed in the bloodthirsty gathering, standing just inside the ring of sheltering trees, looking at the blackened bones that had but a while ago supported and framed living flesh.
She stayed, looking, walking about in horrified fascination, staring up at the remains, some of whom still had their eyes somehow, until the first of the crows came in the early evening, when the smoke had cleared…

*********************
She didn’t want to think about that now.
Yes, Alis, you’ve made a Great Discovery, but you had better get some sleep. You didn’t gather any herbs, and Mother may want to go in the morning.
The Book of Spells went under the bed; she decided to leave the drawer open, in case the dragon needed to stretch, and she blew out the candles.
She looked over at Aros, who was still in his basket, sleeping.
She hoped he knew she wouldn’t really eat him, but with Aros, it was better to keep him guessing; he could be such a cuss sometimes.
Pulling her covers up, she took a deep breath, settled in, and looked out at the setting moon until she drifted off to sleep.